I began in London: watercolours, oils, sketches; either flights of science fantasy or pieces provoked by visits to the countryside, which seemed a lot more wholesome than the grimy city. At least there were a lot of opportunities to view art…so Turner and surrealism were absorbed at the Tate…and were amongst the influences that led to my first show – a group of pictures exhibited in a chic Neapolitan bay in Italy. I did well, though the cost of transporting oils and framed watercolours made it a barely break-even.

Having slept and worked in the same room with those oils for 5 months it was time for fresh air, so I went to live in Galway for a while. A certain earthiness ensued, as well as an appreciation of a place more in touch, perhaps, with its myths and its past, and various oils and watercolours evolved in sympathy with woods and stone…and rain.

Dreamtime over, back to England, and now Dorset…flushed out of the fairytale dankness onto a bare chalky hill overlooking fields of rapeseed…and the coast. Here some new things happened. The forms of flinty stones and the views over cliffs and along beaches were absorbed. The sea appeared more often – in charcoal and oils, often with associated objects which took on their own lives, sometimes moving centre stage. Eventually the realities of conventional UK existence demanded more of me than canvases. I drove a moped along the ridge of the Purbecks for a year or more to College at Bournemouth, where, incidentally, I encountered computers.

Fascinated by the possibilities offered by computers and image manipulation, I began taking photos and merging them with scans of drawings, CG models, textures and digital sketches. Various themes began to emerge, facilitated by the endless experimentation and variation that working digitally allows. Pictures taken with a digital camera become virtual paint, layered into complex surfaces forming new hybrid images.

Using a rough drawing in pencil and charcoal as an expressive base, images of rocks and trees, sand, sky, close-ups of bark are added to create imaginary landscapes. An ink drawing, scanned and enlarged, becomes the template for an experiment featuring roots and twigs. Accidents and chance are welcome, as I am always happy to see the unexpected appear in a picture.

And now…at present I seem to be returning to a more composed style, where figurative sketches form the basis of new work. Recent pictures are more grounded in my reaction to place. In thinking about our presence here in this ‘tranquil haven’ of Purbeck, old images have, for me, become new metaphors. The bay; rocks, trees: guises of protection and watchfulness that also imply something else… 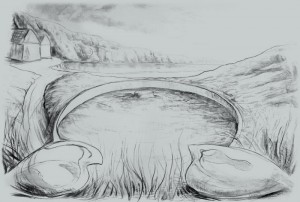 Ian was a fantastic artist and illustrator who also wrote and illustrated history books. There is a blogspot site for his work as well as an online gallery where fine art prints of his work can be purchased: Ian’s blog | Ian Ribbons Art

Mort wrote and performed poetry, among other things. I collected a few scraps of his performances (not much was recorded – if anyone knows of more please get in touch) and put them into a presentation. Click here to see Mort’s stuff… (requires Flash player)

From time to time I'll post new images or work in progress. Hopefully there will be some experimental stuff as well as found images and photos. Any image can be ordered as a custom print if not available in the shop.

An animation inspired by a view across the moonlit bay one evening, the atmosphere was heavy with th...

A delving into forest textures and mysterious forms, a possible encounter with an elemental force...

In we go… I haven’t decided what happens next. As usual....

Inspired by a trip to the Pyrenees – but before I went there…...

I saw this porthole displayed in the toilets of a local pub*, and got thinking… Restroom Visit...